The increasing mobility of human beings throughout the world has led Scalabrinian missionaries to a radical attitude of reform within the Order to better meet the needs of migration and shelter. To continue this process, the Scalabrinian Sisters of the Province of São Paulo met at the São Carlos Professional Center in the city of Aparecida-SP. The event started on the afternoon of this Saturday 10th and ended on the 12th.

According to a report presented by the Mission Manager of the Province of São Paulo, Sister Janet Ferreira (data from the International Organization for Migration), South America contains about 5,826,400 immigrants here for geographical, environmental, political and global economic crisis reasons. the data also reveal a feminization of migrations, since 50.9% of these displaced are women, followed by 17.7% of young people under 20 years of age and 16.5% of those over 65 years of age.

The Latin American countries that have received the largest number of migrants are Argentina with 2 million, Venezuela, 1.4 million and Brazil with 713 thousand emigrants. These come from Haiti, Cuba, Venezuela, Ecuador, African countries (Senegal, Congo, Angola, Mozambique, Nigeria, among others), South and Southeast Asia (Bangladesh, Pakistan, Philippines, India, Nepal) and from Asia and the Middle East (Syria) These migratory flows tend to increase without precedent in history. The Congregation hastens to reorganize all its dimensions (pastoral, formation, apostolate and administration) in order to face the challenges that this reality proposes. 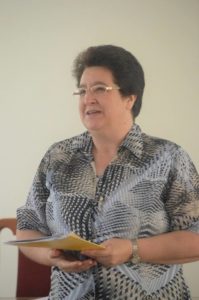 But entering into a process of reforming a 120-year history order requires a lot of openness from the members, a significant passion for the mission, because it presupposes structural changes, in this regard Sister Sandra Maria Pinheiro, provincial superior of the Province of St. Paul emphasized that the reorganization of the Congregation should be undertaken as a movement of spiritual rather than administrative renewal, with an attitude of availability, a disposition of the heart for the search for the will of God, and rethinking the structures in view of the mission.

Also according to Pinheiro, this reorganization process requires that everyone has “a giraffe appearance”. The giraffe with its large neck can look up and open up to the horizons. “We need a look that does not exhaust our little world of personal fears and needs,” he said.

For Sister Sandra, the reorganization “is an opportunity to reinvent the Consecrated Religious Life for our times, and thus recover its prophetic character of proclamation because we want to serve more and better for migrants and refugees”. Sr. Neuza Botelho dos Santos and Sr. Ana Conceição Sales also advised the formation and administration of the Sister, who presented the path taken so far in these areas towards reorganization.

Present in 27 countries, the Scalabrinian missionaries intend to reduce the number of provinces, to unify their efforts in all sectors to make their presence more effective where the migratory flows are greater.These days the Sisters belonging to the Province of Aparecida are satisfied, with based in São Paulo, which will be merged into one unit from the three existing provinces in Brazil from December 2018.

Sister. Lucia one of the 100 most influential Brazilian health

The Itinerant Service, a process of reorganization of the Congregation
We use cookies to ensure that you have the best experience on our site.Ok
Scroll to top