Who guides and inspires us

You are here: Home / Who guides and inspires us

Who guides
and inspires us

“Charity, vision, unity: a portrait of a founder”

At the age of 18 he entered the seminary, being ordained priest in 1863 and ordained bishop in 1876. During his life, he worked incisively in different realities and pastoral contexts, but it was his involvement in favor of migrants that made his work and his holiness known throughout the world. Yet his sensitivity to the drama experienced by migrant families cannot be separated from his attention to all the poor he encountered in the diocese of his time: prisoners, the sick and the deaf and dumb.

For Scalabrini it was the task of the Church to intervene with governments and political groups whenever the interests of the poor were at stake. In the pastoral letter he wrote to the diocese of Piacenza in 1882, he said that it was “necessary to participate in public life, using all lawful means, for the triumph of truth and justice”. This willingness and openness to new social issues led him to approach the drama of migrants and, at the same time, to set out to serve those in need on his way. In a pastoral letter of 1891 that still today spurs us on to missionary activity, he said: “We must leave the temple if we want to exercise a healthy action in the temple!”.

The sensitivity for the migrants was stimulated, in 1880, in the Milan Railway Station, by the dramatic conditions of the poor emigrants who were waiting for the train to Genoa, from where they would embark for the Americas. This is what the bishop of Piacenza describes them: “Not without tears, they had said goodbye to the native village, to whom they bound so many sweet memories; but without regret they disposed themselves to abandon their country, since they did not know it except under two hateful forms, the lever and the tax collector, and because the poor land is the land that gives him bread, and far away there they hoped to find it. bread, less scarce if not less sweaty“.

In the search for adequate responses to the suffering of migrants, there are countless activities carried out by Scalabrini: studies and publications, sensitization of the Church in Italy on the phenomenon of emigration, proposals for the law on Italian emigration, foundation of the Congregation of Missionaries (1887) , of the San Raffaele Society (1887) – a lay movement at the service of migrants – and Missionary Sisters (1895) of San Carlo Borromeo, involvement of the Sisters Apostles of the Sacred Heart, which sends for service among Italian migrants in Brazil (1990 ). To know the situation in which the Italian emigrants lived, Scalabrini himself, despite illness and with 62 years, went, between 1901 and 1904, in the United States, Argentina and Brazil.

On these trips he wanted to visit the Italian emigrant communities in person, despite the many difficulties of transportation and transportation of the time. His commitment proved to be of great support to the emigrants, but also to the work begun by the Fathers and the Missionary Sisters of San Carlo. In a letter to Pope Leo XIII, in 1901, we find a sort of report of the completed work with evaluation, motivations and hopes:

“If I look at the works accomplished in the midst of many difficulties, I have great reason to rejoice in the Lord; but if I descend with my thought into the secret of my spirit, I find nothing but a matter of regret for so well that I have not done or have not done well. Of one thing I can assure you, Most Holy Father, and it is that in all things I have never had any other aim than the glory of God and the health of souls entrusted to me”.

His prophecy, his charity, his love for migrants and his teachings give us the example of a holy bishop and a model also for our days. He died on June 1, 1905. He was beatified with the title of Father of the Migrants by Pope John Paul II, on November 9, 1997.

“Let’s go, let’s put ourselves in God’s hands and let’s do His Will”

“Only the sincere, cordial, sacrificed union can make us great …”

Co-founder of the Missionary Sisters of San Carlo Borromeo Scalabriniane. To find out more about the biography of Mother Assunta Marchetti, visit the website. 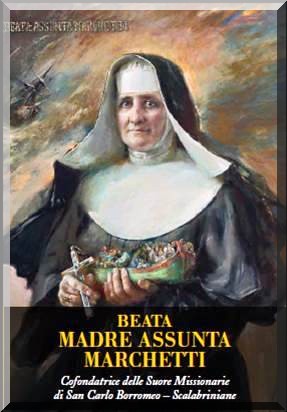 “O Jesus, oh my Jesus present here alive and immortal, accept these vows, bless them, do a miracle with this servant, making a sinner a saint”

co-Founder of the Congregation of the Missionary Sisters of St. Charles Borromeo – Scalabriniane, was born on October 3, 1869 in Lombrici di Camaiore – LU – Italy.

After completing his theological studies, he was ordained a priest in 1892. Since he was young, he was involved in the suffering of Italian emigrants. Thus, when half of his parishioners decided to leave for Brazil, he undertook to accompany them to the port of Genoa.

This first contact with the reality of emigration, combined with the missionary vocation and the significant meeting with Monsignor Giovanni Battista Scalabrini, transformed Father Marchetti into an “external missionary” of the Congregation of the Missionaries of San Carlo, beginning his mission as a chaplain on board , with the aim of accompanying the emigrants in the long, difficult, suffered and sometimes tragic crossings of the ocean

The Cristoforo Colombo Orphanage arose in the city of São Paulo, the fruit of the faith and courage of those who gave their lives for those most in need.

Wherever they were the emigrants, the poor, the sick, there was Father Marchetti to bring the comfort of faith, the strength of hope, the enthusiasm of life. In this unconditional dedication to the material, human, social and spiritual good of migrants and of every poor person he met, Marchetti suffered the infection and fell ill with typhus, a cause that led to his death at the age of 27, December 14, 1896 .

This is how Father Scaletti expressed himself to Scalabrini: “He lived an irreprehensible life as a child of God among the most needy emigrants and was the messenger of the Word. His life was not in vain: he lost it in sacrifice and in the service of Jesus Christ identified in the emigrant (see Fl 1,11-17) “.

The Cause of the Beatification of Father Giuseppe Marchetti began in 1996, the year in which the centenary of his death was celebrated. The diocesan investigation for the ascertainment of his heroic virtues took place in the diocese of San Paolo from 5 May 2000 to 28 November 2001. He was declared Venerable by the decree promulgated by Pope Francis on 8 July 2016.

He was born in Arona, 20 October 1538 and died in Milan on 3 November 1584. Son of Count Gilberto Borromeo and Margherita Medici, with only 22 years of age he was appointed cardinal by Pope Pius IV, his uncle. He later held the office of Secretary of State in the city of Rome.

Gifted with apostolic virtue and ardor, he passed through a difficult religious crisis between the years 1962 and 1963, after the untimely death of his brother Federico. Although he was a very wealthy and sole heir to paternal goods, the young cardinal set off with untiring rigor in pursuit of perfection and holiness. He began to fast on bread and water one day a week and to dedicate long hours to prayer.

At the age of 27 he was appointed bishop of Milan where he consecrated himself as a tireless pastor. He began his residence in his diocese with various acts of disinterest and generosity, renouncing the offices and the copious revenues that derive from it. Francesco Cusani, a secular historian, in 1861, writes: “Charles began with a shining example of disinterest, renouncing an annual income of one million three hundred and fifty thousand lire, coming from fiefs, benefits and pensions granted to him by the pope. He converted a part to the benefit of the public, employing it to erect useful and grandiose buildings”.

St. Chrles frequently made pilgrimages, especially to the shrines of the Madonna. In his travels and apostolic activities spread his holiness everywhere and the announcement of the Good News. He distinguished himself in catechesis with the foundation of 740 catechetical schools attended by more than 40,000 faithful under the guidance of 2000 lay catechists prepared by him.

He intervened in the social life of his time with skill and wisdom, introducing customs reforms and fighting the injustices of the powerful against the poor. St. Charles participated in the Council of Trent. Many of his ideas were accepted and thus became a patrimony of the Church.

His figure is historically related to the numerous welfare works carried out in Milan on the occasion of a severe famine, in 1570, when he fed about three thousand people a day, and above all, during the terrible plague of 1576-1577, known as the “plague of St. Charles “, when he decided to stay in the city visiting and helping the sick in the huts and the hospital.

St. Charles, an example of constancy, charity and apostolic zeal, was chosen by Don Giovanni Battista Scalabrini as patron and protector of the Missionary Congregations of the Sisters and Fathers he founded. 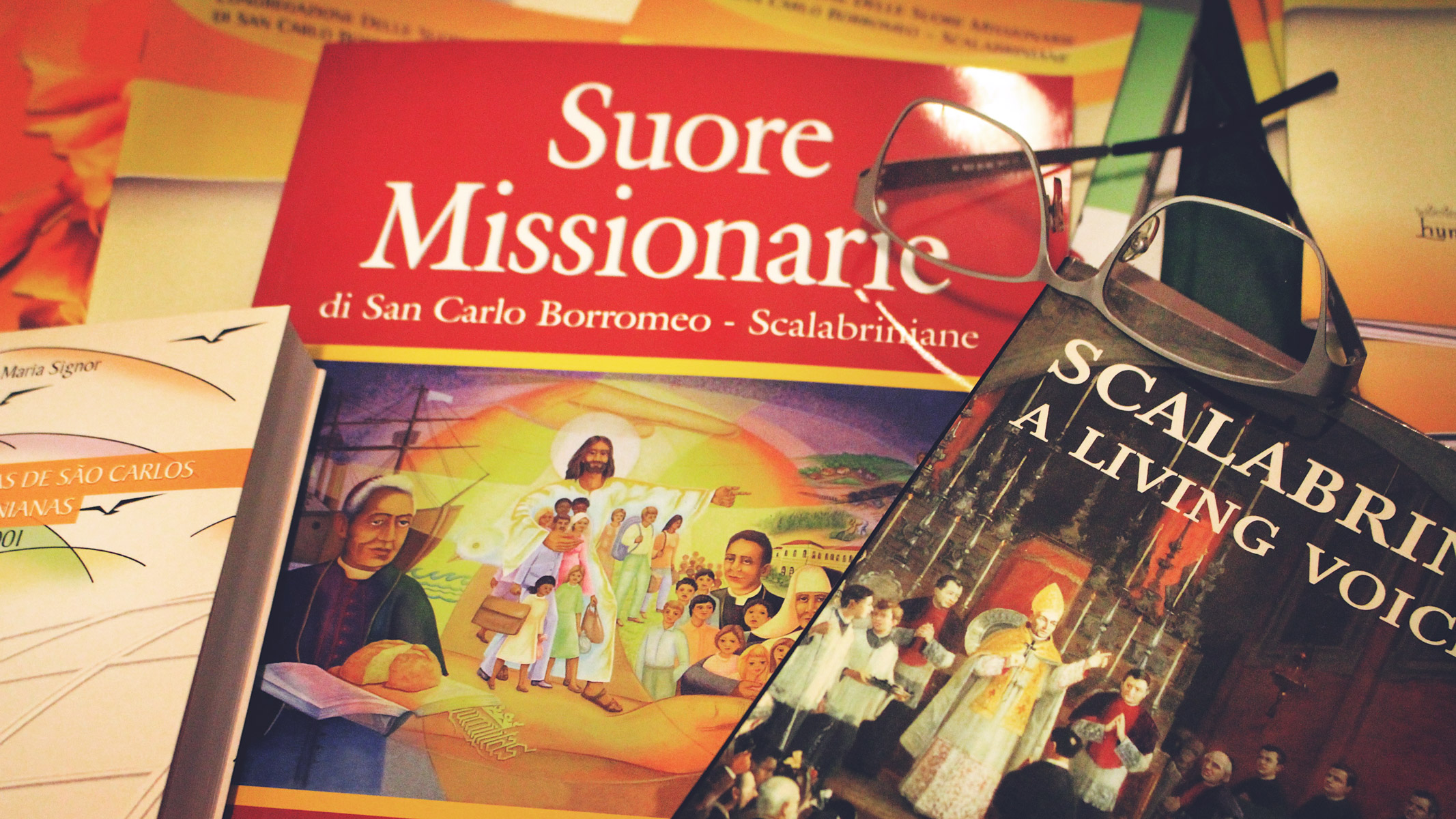 Donate to the Congregation