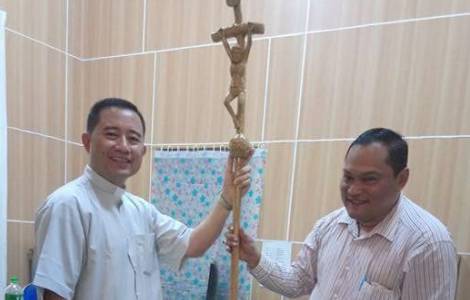 Yangon – Pope Francis during his apostolic visit to Myanmar, which began this morning, will use a wooden pastoral made by hand and donated by Catholic refugees from the Kachin ethnic minority, who are now in the refugee camp of the city of Winemaw in the Kachin state. population with a Christian majority, in the northern part of Myanmar.

This is revealed to Fides by Joseph Myat Soe, a secular Catholic active in the Kachin region, explaining that the faithful Kachin are now in the refugee camp of Winemaw due to the civil war between the Burmese army and the Kachin armed groups, in one of the ethnic conflicts that are registered in the country, composed, on a social level, by the majority of bamar (Burmese) and by 135 ethnic linguistic minorities.

As Myat Soe informs, the Kachin refugees offer this wooden pastoral care to the Holy Father “as a wish to restore peace in the Kachin state, since it will not be possible for them to attend Mass in Yangon, due to the state of poverty in which they live”.

Advent, Pope: “Time in which Lord comes to meet us”

Scalabrinians, Sister Lucia professes perpetual vows
We use cookies to ensure that you have the best experience on our site.Ok
Scroll to top